Turn any window or transparent surface into a Video Wall.

Rear Projection Film can be cut into any shape.
The pieces can be simply joined to create large format displays.

Oh my Print Solutions Rear Projection Film has a self adhesive layer (peel and stick) making it easy to apply to glass or plexiglass. 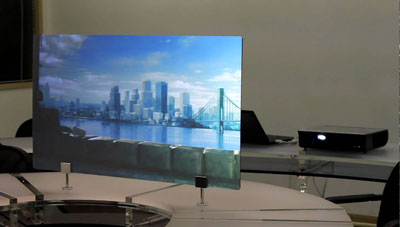 Easy to install and remove on glass or acrylic (plexiglass) surfaces.
Adhesive back. Easy to peel and stick. Just use soapy water, apply, then squeegee out the water.
Professional Installation is recommended for larger areas and for safety.

No need for specialized projection equipment as a standard projector will work very well in most circumstances. Our “Smart” Rear Projection Film picks up light extremely well for a bright and vivid picture. Perfect for retail locations and events.

Black rear projection film we feel is the closest match to 3M’s famous Vikuiti™ Film. It has the highest contrast and the most vibrant picture. It is a complete blackout of your window and is a higher cost than the other options.

This rear projection film has the 2nd brightest contrast and an excellent picture. For the price point it offers the most bang for the buck. More like a brown colour, when the projector is not on, this film does not allow anyone to see in or outside and is great for security. It does add some natural light.

Light Grey or White Rear Projection film lets a lot more natural light in the window when not in use. The picture image is of still excellent quality however a brighter projector is recommended for best results.

Transparent Rear Projection film allows people to see in and outside of the window. It also can produce a holographic effect. A brighter projector is recommended for best results.

When you are not projecting on it’s a typical mirror.
You can then surprise your audience with your message as you project on it from behind.
Excellent for nightclub or washroom advertising.